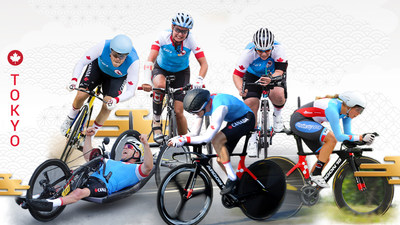 Former world champions, Chernove and Wilson – who compete in the men’s C2 and C1 classifications respectively – will race in both the track and road events.

«Being given the opportunity to represent Canada on the world stage is such an incredible honour,» said Chernove. «It is both exciting and daunting for my first race since early 2020 to be the Paralympic Games. Performance wise, I’m always racing against myself and this rings even more true after such a long period of solo training. My goal is to be the best I have ever been, to focus on all that’s within my control, and to have personal best performances in Japan.»

Shelley Gautier (Niagara Falls, ON) was also a Rio 2016 Paralympic Games medallist, capturing bronze in the T1 time trial. Gautier, a tricyclist who will be making her third Paralympic appearance (London 2012, Rio 2016), recently returned to competition at the 2021 Para Road World Championships, where she won both the time trial and road race events.

The men’s H3 handcycling category will see three Canadians compete – Games veteran Moreau will be joined by Joey Desjardins (Hawkesbury, ON) and Alex Hyndman (Morpeth, ON), who both will be making their first Paralympic appearances. The trio will see action in the road time trial and road race.

Also set for their debut Paralympic Games are Kate O’Brien (Calgary, AB) and Keely Shaw (Midale, SK), who will suit up for Canada in the women’s C4 classification. A track cyclist who competed for Canada at the Rio 2016 Olympic Games, O’Brien made a blazing entrance into Para cycling just last year when she captured a gold medal and set a new world record at the 2020 UCI Para Cycling Track World Championships in the C4 500m time trial. Shaw, a member of the Canadian team for four years now, was also a medallist at her first Track Worlds, picking up a silver medal in 2019.

«I’m so excited to be representing Canada at the Tokyo Paralympic Games!» said O’Brien. «Without the doctors, nurses, medical team, as well as my family, friends, and community, I would not have had this opportunity to wear the maple leaf again; thank you to them for all they have done. This past year and a half has been extremely difficult for all Canadians. I would love to win gold and aim for another world record, but my main goal is to send out a huge thank you to everyone who has helped me get back to this sport that I love.»

Rounding out the squad is Marie-Ève Croteau (Quebec City, QC), who has been named to her third Paralympic Games team, following London 2012 and Rio 2016. The tricyclist in the women’s T2 category ultimately did not compete in London due to injury but returned for a fourth-place finish in Rio.

Canada earned eight athlete slots for the Tokyo Games through qualification points gained at world cups and world championships between January 1, 2018 and March 3, 2020. An additional spot was received through bipartite commission invitation, which was allocated to Gautier.

«Our Paralympic nominees, comprised of both rookies and veterans, will support each other in order to perform at these Games,» said Sébastien Travers, Para cycling head coach. «Although some of our selected athletes have not raced internationally in the last 18 months, they have maintained a high level of training and we are confident in their progress. We will be going to Tokyo with the goal of achieving medal performances, both at the Izu Velodrome and the Fuji Speedway.»

Cycling was Canada’s most successful sport at the Rio 2016 Paralympic Games, winning nine medals (one gold, three silvers, and five bronze). Eight of those podium performances were from team members returning for the Tokyo Games.

«Congratulations to the entire Para cycling squad heading to Tokyo!» said Stephanie Dixon, chef de mission, Tokyo 2020 Canadian Paralympic Team. «Canada’s Para cyclists have had so much incredible and hard-earned success over the last few years, and it will be so exciting to see them return to competition. The entire Canadian Paralympic Team will be behind them all the way.»

The postponed Tokyo 2020 Paralympic Games will take place from August 24 to September 5, 2021 in Japan. Canada is expecting to send a team of approximately 130 athletes, and audiences across the country will be able to follow all the action live through coverage from the Canadian Paralympic Media Consortium, including broadcast partners CBC/Radio-Canada, AMI, and Sportsnet, and digital partners Twitter, Facebook, and MXZN.