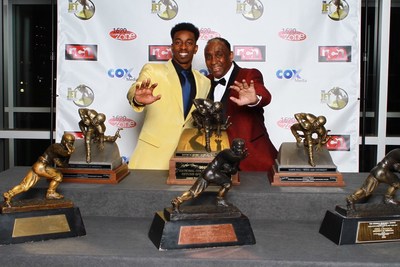 The coveted Jet Award is presented to the most outstanding college football return specialist in the country. The Award has garnered national attention from coaches and players alike since its inception in 2011, as one of the most prestigious football awards.

Net proceeds from the annual Jet Award Banquet directly support the Johnny Rodgers Career and Technical Education Scholarship at Metropolitan Community College, which is estimated to exceed $350,000 in scholarships this year for youth post-secondary education. Metropolitan Community College will once again match scholarship proceeds on a dollar-for-dollar basis. In addition, 80 percent of recipients will qualify for a Pell grant, bringing the total proceed dollars to more than $1 million.

About the Jet Award

The Jet Award has been presented for the past nine years to the most outstanding college football return specialist in the country. Proceeds from the event will go toward the Johnny Rodgers Career and Technical Education Scholarship Fund at Metropolitan Community College. The Jet Award is named after Johnny «The Jet» Rodgers, the 38th Heisman Award Winner and the first Heisman winner from the University of Nebraska, Lincoln. To learn more, visit www.thejetaward.com.

SOURCE Johnny «The Jet» Rodgers and the Jet Award