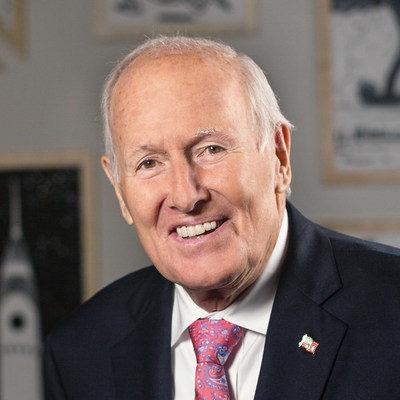 «John was one of the most dynamic, energetic, and positive personalities one might ever encounter,» said Andrews. His unwavering optimism, enthusiasm, and true passion for life – and most of all, for people – was evident in everything he did. For John, it was all about relationships. He cared deeply, certainly for his family, but also for associates, creators, and business partners, ensuring all felt valued, and welcome.»

«John didn’t just build a business, he built a culture,» said Garry Trudeau, creator of Doonesbury. «Creators enjoyed unprecedented freedom and support from the team he and his late partner, Jim Andrews, assembled over the years. He was a joyful warrior on our behalf, and earned the rare distinction of being every newspaper editor’s favorite salesman. His blarney was legendary, but behind it was a deep regard and respect for the artists he championed. That loyalty was mutual; many of us fondly called him ‘boss’ for decades. All of us will miss him dearly.»

«I’m not sure I ever met anyone who was more enthusiastic and energized about life and work than John,» said Gary Larson, creator of The Far Side®. «I confess to being a little on the withdrawn side when I first meet someone, and here was this highly animated, twinkle-in-his-eye guy with a great smile and strong handshake, wholeheartedly welcoming me to my new home as a cartoonist. I might have initially thought his demeanor couldn’t be entirely real, but over the years I came to realize that, no, this was John. He truly loved the business he was in, cared about others, and seemed to be an eternal optimist. I think that’s a rare species. Over the years, every time I crossed paths with John, he made me feel like I had just returned from a Siberian prison camp. It was effective, and I will miss him, and his glass-is-half-full attitude toward life.»

«John made dreams we didn’t know we had come true. He was the dazzling light behind my career and so many others,» said Cathy Guisewite, creator of Cathy.  «He changed the comic pages and everyone who read them forever with the brave chances he took on our work, the glorious walls of support he built behind us, and his boundless, infectious insistence that anything and everything was possible. But the very best of John was how he wrapped his giant generous heart and soul around every one of us, infused us with his deep values and joyful spirit and made us feel so much more than part of a team. He made us part of a family.»

«John McMeel was a dear, dear man who loved the writers and artists he supported for over 50 years. He believed in us and fostered a work environment that allowed us to be the children that we are,» said Jim Davis, creator of Garfield. «A charming and witty man, he was always armed with words of support, encouragement and inspiration. My wife, Jill, and I will miss John dearly. John McMeel was all heart, and our hearts go out to his family, friends and associates.»

Born January 26, 1936, in South Bend, Indiana, John was the son of the University of Notre Dame’s team doctor under football coach Knute Rockne, growing up in the shadow of the Golden Dome. It was an abiding influence and helped to establish a firm commitment to faith, family, friends, and the importance of these relationships, sustained through a remarkable life.

Following graduation from Notre Dame in 1957 with a degree in business, John enrolled in law school at Indiana University. After a year in law school, he transitioned to sales as assistant manager and national sales director of Publishers Hall Syndicate in New York City, selling newspaper features. While in New York, he met and married Susan Sykes in 1966.

After a few years editing and selling newspaper features on the side, John and James (Jim) Andrews founded Universal Press Syndicate with their wives, Susan McMeel and Kathleen Andrews, in 1970.

John’s energized personality helped catapult the company into one of the most influential and successful media enterprises in the country. As the burgeoning company grew in prestige and revenue, John was met with a tremendous challenge: the untimely death of his business partner, Jim, in 1980. Undeterred, John worked through his grief and continued to honor Jim’s memory by developing and nurturing their dream.

It is hard to overestimate John’s influence on the industry and AMU’s impact on popular culture. Thanks to his shared vision, creator-first approach, and commitment to excellence, AMU features define the zeitgeist of the time, with some of the most beloved and recognizable cultural icons in recent memory. Creators, including Bill Watterson (Calvin and Hobbes), Garry Trudeau (Doonesbury), Gary Larson (The Far Side), Jim Davis (Garfield), Tom Wilson (Ziggy), Rupi Kaur (milk and honey; the sun and her flowers, home body), Dear Abby and Roger Ebert, to name a few, have one resource in common: Andrews McMeel Universal, with John McMeel at the helm. With a remarkable gift for recognizing the potential of creative talent, and an exceptional ability to successfully develop it innovatively into products and services, John’s legacy continues to inform and entertain millions after five decades.

His passion for people, entrepreneurial spirit, and journalistic instincts served him well as the media environment continued to evolve, and as the company grew, he ensured that a family-oriented culture thrived as well.

A vocal and involved supporter of Kansas City, McMeel was a former member of the board of directors of the Harry S. Truman Presidential Library and Museum, the William Allen White Foundation Board of Trustees at the Journalism School at the University of Kansas, the Board of Trustees of St. Luke’s Hospital Foundation, and the UMKC Board of Trustees. He was a vibrant advocate of Rockhurst University, through the McMeel Family Gallery featuring framed original strips depicting interpretations of learning, leadership and service, and the McMeel Faculty Institute on Service Learning, among other projects.

In addition, McMeel was a co-founder of Christmas in October, an intensive annual two-day renovation project designed to improve the living conditions of the elderly, disabled and needy in Kansas City.

Thousands of homeowners have benefitted from the work of volunteers in Christmas in October’s 37-year history.

He was formerly an executive board member of the International Press Institute, and board director of the Federal Association of the Sovereign Military Order of Malta. For his valuable work through Christmas in October, the Sovereign Council awarded him the Cross of Merit Pro Merito Melitensi, given to members and volunteers who have done extraordinary work for the Order in serving the poor and the sick.

Additional accolades include recognition as a Caring Institute Awardee (1991), the International Relations Council Award for Contributions to the Community (1998), the Human Relations Award from Jewish Community Relations Bureau/American Jewish Committee (2002), co-recipient of Rockhurst University’s Father Van Ackeren Spirit Award (2002), the John J. Sullivan Jr. Foundation Humanitarian Award by the Irish Museum and Cultural Center of Kansas City, and with Susan, the Marion and John Kreamer Award for Entrepreneurship in Volunteer Community Service from the UMKC Henry W. Bloch School of Business and Public Administration (2009). In 2015, the Indiana Journalism Hall of Fame named John as the first recipient of its John P. McMeel Distinguished Award, subsequently given periodically to an individual who has contributed to the advancement of journalism in Indiana.

John’s contributions to Notre Dame were significant, and enduring. He was a former member of the Advisory Committee of the John W. Gallivan Program in Journalism, Ethics and Democracy, and the Advisory Council of the College of Arts and Letters. He established the McMeel Family Chair in Shakespeare Studies; the McMeel family sponsors the annual Red Smith Lecture Series; and was honored with the Edward W. Sorin Award in 1997, bestowed to a distinguished alumnus to commemorate the university’s founder.

In 1981, after Jim’s death, John established the James F. Andrews Endowment and the James F. Andrews Memorial Scholarship Fund with Kathleen to launch and sustain the Summer Service Learning Program at the University of Notre Dame. Thousands of Andrews Scholars across the country have participated in the program since its inception.